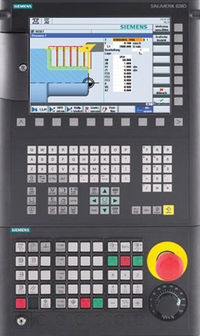 Definitions:
The drive configured for the specified axis could not be found. For example, a Profibus slave was configured on the NC but is not contained in SDB1000. Reactions: – Mode group not ready. – Channel not ready. – NC Start disable in this channel. – NC Stop on alarm. – The NC switches to follow-up mode. – Alarm display. – Interface signals are set.

Remedy:
Possible causes:
• $MA_ENC_TYPE not equal to 0 as a result of an oversight; the encoder should actually be simulated (= 0).
• $MA_ENC_MODULE_NR entered incorrectly, i.e. the logical drive numbers were exchanged and an invalid value is stored for this drive in $MN_DRIVE_LOGIC_ADDRESS (see next paragraph) or a drive number which does not exist on the bus was entered (check the number for slaves, for example).
• $MN_DRIVE_LOGIC_ADDRESS contains values which were not configured on the Profibus (i.e. the values are not in SDB1000) or different addresses were selected for the input and output slots of the drive in the Profibus configuration.

Program Continuation:
Switch control OFF – ON.