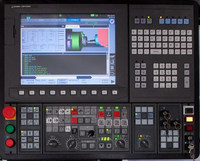 Please transfer a workpiece in M151 mode when you use C axis instruction after workpiece transfer.

A-> M66 (Turret indexing position free) was instructed in.

The turret index sequence must be executed on programmable limit.

This alarm might be generated in the block in which C axis is not instructed either because the change of the internal instruction value of C axis is checked.

In case of collision check way between A turret and B turret was chosen BARRIER.(2-saddle model)

Expected faulty point
There is an instruction that cannot be used while CAS engine works. Please confirm the NC program.

Treatment measures
Please release the Collision Avoidance function by switching off (CAS parameter or M instruction) when you want to execute the instruction.
However, interference is not detected in that case and drive, please after it confirms it enough.
In case of code=12, After it is confirmed not to interfere, bit 2 of NC optional parameter bit No.62 is set to “1”.
The NC program can be executed without correcting the NC program because alarm B becomes alarm D.